13.08.18 11:59
Lately, I have been spending my days alternately at the British Library and the Dickens Museum, and my evenings at the British Newspaper Archive, looking up this and that. Suffice to say, I have read my share of old newspapers, magazines, journals, reviews, gazettes, couriers, and heralds.

On Friday I found something interesting: a newspaper notice that seemed to have travelled back in time. Which made me rather excited.

But first some background.

As you may know, Charles Dickens left The Mystery of Edwin Drood unfinished when he died in 1870, and I wrote my PhD on the many people who have tried to figure out where it would have ended had he lived (and those who tried to complete it for him -- with or without posthumous help).

Now, by 1914, this had developed into quite a phenomenon, and the last decade had involved not only some of the Britain's finest magazines and newspapers, but some of its most famous names and most active writers in the attempt to figure out once and for all the mysteries of Dickens' novel (and make some money for charity in the process).

At the heart of the matter there is, as the title suggests, the mystery of Edwin Drood -- namely, what has happened to him. Has he, as the text would seem to suggest, been murdered by his uncle, John Jasper? Or has he, in preparation for a fantastic reveal, survived the attempt? And this is not the only question to be resolved. Six months after Drood's disappearance another character shows up, very much of the detective style, and quite possibly in disguise. I won't list all the proposed candidates for the real identity of Dick Datchery, but you may not be surprised that Drood is one (sometimes in a convoluted theory where Drood is masquerading as another new character named Tartar, who in turn becomes Datchery to solve the mystery). A clerk named Bazzard is another, and a third is a young woman named Helena Landless. Either one of these proposals had the potential to make a lot of people very angry (generally because they were in favour of one of the others, or simply because the very idea of that specific character managing to present themselves as Datchery was really stretching suspension of disbelief beyond breaking point). And I haven't even gotten into the fraught questions of who would survive, fall in love and (naturally) marry.

This, in short, is the state of things when the Dickens Fellowship decide to hold a Trial in London, on the 7th of January 1914, trying John Jasper for having "feloniously, wilfully, and of his malice aforethought [killed and murdered] one Edwin Drood against the peace of every true Dickensian" (Ley 1914, [7]). It is a splendid affair. The jury consists of some of the foremost men of letters in the nation (men, of course -- there are no women on British juries until after the war); the prosecution is led by most active Droodian of the age, J. Cuming Walters, and the defence by Cecil Chesterton; G. K. Chesterton serves as judge -- and George Bernard Shaw is foreman of the jury. This is where it gets interesting.

Hundreds of people show up for the trial, which lasts until midnight. The press have dressed in period costume. People who have not been able to get seats allegedly wait outside (in January) to hear the verdict. Witnesses dressed up as characters from the book lay out the evidence. Two of them (Bazzard and Helena) claim to be Datchery.1 Newspapers across Europe have expressed (extravagantly optimistic) hope that the question could be laid to rest at last. The prosecution gives a splendid speech arguing Jasper has murdered his nephew, backed up by the evidence of Helena as Datchery; the defense, while admitting the attempted murder, give another splendid speech, claiming Drood has survived the attack (with Bazzard/Datchery as their authority).2 The foreman of the jury rises, and (wihtout consulting the jury) declares that

I am happy to be able to announce to your Lordship that we, following the tradition and practice of British Juries, have arranged our verdict in the luncheon interval. I should explain, my Lord, that it undoubtedly presented itself to us as a point of extraordinary difficulty in this case, that a man should disappear absolutely and completely, having cut off all communication with his friends in Cloisterham; but having seen and heard the society and conversation of Cloisterham here in Court to-day, we no longer feel the slightest surprise at that. Now, under the influence of that observation, my Lord, the more extreme characters, if they will allow me to say so, in this Jury, were at first included to find a verdict of Not Guilty, because there was no evidence of a murder having been committed; but on the other hand, the calmer and more judicious spirits among us felt that to allow a man who had committed a cold-blooded murder of which his own nephew was the victim, to leave the dock absolutely unpunished, was a proceeding which would probably lead to our all being murdered in our beds. And so you will be glad to learn that the spirit of compromise and moderation prevailed, and we find the prisoner guilty of Manslaughter.

Whereupon G. K. Chesterton commits everyone present (except himself) for contempt of court.

So far so good.

The trial was left without a viable verdict. You may imagine the outrage. People are shocked, appalled, and at the same time not surprised at all that this would happen in a trial that involved Shaw in its proceedings. The Americans almost immediately decided they would hold a proper trial (presumably leaving the pesky socialist agitators out of it). 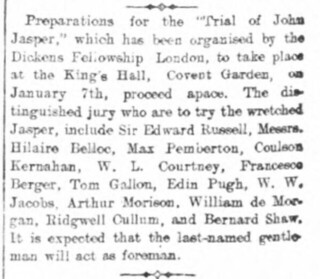 From the Portsmouth Evening News, 31 Dec., 1913.
© 2018 Findmypast Newspaper Archive Limited
Now, on Friday afternoon, I sat going over all the press notices anticipating the trial. They start already in September 1913. By the end of December 1913, there are a lot of references to the make-up of the jury, which is beginning to fall into place and has been published on a poster made to look like a classic 19th century broadside. It is all very exciting.

And then my eye travelled down the page and I saw something not covered in all the other notices: 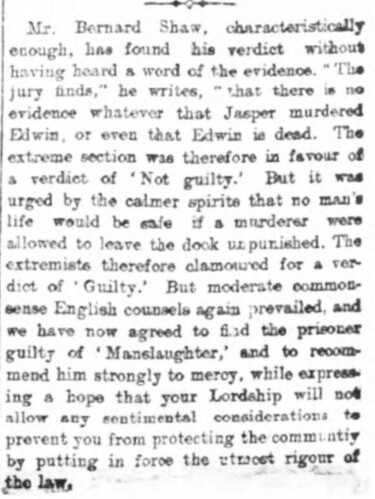 From the Portsmouth Evening News, 31 Dec., 1913.
© 2018 Findmypast Newspaper Archive Limited
This is so in tune with the reports after the trial that at first I was fairly convinced the Portsmouth Evening News printed it in the wrong place (that is, a week early). Which tells you all you need to know about what reading too many identical newspaper articles does to your brain.

Now, when people talk about Shaw's ideas of Drood before the trial, the text generally quoted is a letter he wrote to B. W. Matz on the 28th of November, preserved in the Duffield collection at the Dickens House Museum, where he says that

the only verdict I could conscientiously arrive at is one of Not Guilty on the ground that if Jasper did not kill Drood he was clearly not guilty of murder, and if he did, there is no guilt in killing an insufferable bore, even when the slayer is almost as great a bore as the slain.

I was therefore surprised and delighted to come across the judgement repeated almost verbatim a week before the trial was held.

Looking through my photos from the Duffield collection in the Dickens House Museum, I found that the Liverpool Echo, the Morning Advertiser, and The Daily Chronicle also reported it on the 31st, and the Manchester Guardian repeated it on the 1st of January.

This may also explain J. Cuming Walters' comment quoted in various newspapers on the 6th, that

my intention is to hang John Jasper. It's going to be a desperate affair, I can tell you, with no 'Manslaughter' or mitigation of any sort about it.

which had also rather struck me by its prescience.

In short: Shaw's verdict did not spring from the inspiration of the moment, as has sometimes been suggested, and the Prosecution, at least, cannot have been altogether unprepared for the antics of the Foreman on the fateful day of the 7th.

It does, however, raise another problem: "'The jury finds,' he writes, 'that there is no evidence.'" Not a single newspaper deign to tell me where he has written it. Is it, as each would seem to suggest, personal correspondence to a select few local newspapers in Britain? I would go down the rabbit hole, but I have a chapter to write, and this footnote is already much too long.

1 It had been agreed beforehand that Drood would not be called as witness by the defense, and no body would be produced by the prosecution -- as that would be silly.↩
2 You can read Ley's transcript of the whole event here.↩


Ley, J. W. T. The Trial of John Jasper; Lay Precentor of Cloisterham Cathedral in the County of Kent, for the Murder of Edwin Drood, Engineer. Verbatim Report of the proceedings from the Shorthand Notes of J.W.T. Ley. London: Chapman and Hall, 1914.