The narrative significance of Dickens' death

[Edwin Drood] is, after all, not such a fragment as it looks. In itself it is really complete. If it pauses in mid-story, it is exactly at the point where the stop, if inevitable, could best occur. (“Literature: The Mystery of Edwin Drood,” The Athenaeum, 1870)

I suspect that anyone who knows the history of frantic speculation that accompanies Dickens' unfinished The Mystery of Edwin Drood would be surprised to hear it described as “not such a fragment as it looks” and “really complete”. However, the anonymous writer in The Athenaeum is not entirely alone: 120+ years later, in “Who Cares Who Killed Edwin Drood?, or on the Whole I’d Rather Be in Philadelphia” (1996) Gerhard Joseph writes that

there is not, nor need there be, any more. Whatever Dickens’s intention may have been had he lived to write further, the fact that the last extant chapter of Drood is the last thing in both his art and his life encourages us not merely to speculate about what might have come textually thereafter . . . but it also allows us to make meaning of both Dickens’s novel and life as if what we have up to the end of chapter 22 is all there imaginatively is; it allows us to read that chapter as an ending of a finished manuscript rather than as the exact middle it has been for most previous readers. (Joseph 170)

He goes on to point out that the title of the final chapter (“The Dawn Again”) echoes that of the first (“The Dawn”); likewise, Jasper’s visit to the opium den in the final chapter provides the beginning of the dream that we only saw the final part of in the first chapter. As Joseph sees it, the repetition provides closure, and we can therefore treat the text as complete, with a beginning and an end. The important bit about the end, of course, is that it somehow echoes and makes sense of what has gone before.

Allow me a small explanatory digression wrapped around a slight oversimplification: Reading an unfinished novel is like reading any novel for the first time; and as first-time readers we keep forming and discarding provisional ideas of what is going on in a text, up until the point where the ending (as set down and sanctioned by the author) confirms or overthrows the latest one (something along the lines of what Roland Barthes in S/Z called the hermeneutic code). We are really quite good at this, and most of us do it without thinking.1 The trouble is that any clues we find along the way are also potentially red herrings; and when dealing with an unfinished text (and The Mystery of Edwin Drood is of course the classic example), the reader is left without a sanctioned ending from which the right reading can be distinguished from the wrong.2 We simply do not know where it was headed, or even what kind of book it would have been when it got there (whodunnit, psychological thriller or science fiction?), nor do I think we can ever know (I rather like that about the book).

One way of dealing with this is to speculate as to the intended direction of the plot, another is to look for internal coherence in the text by attempting to treat it as if it were complete. There is a third way, however. Because if the function of the author is to confer wholeness on, and sanction (though not determine) meaning in the text, Dickens could be said to have gone above and beyond (and no, I am not referring to the oh so wonderfully dreadful Spirit Pen completion): Through some marvellous metonymic magic, the end of Dickens sometimes comes to stand in for the end to his novel, conferring significance on and highlighting specific passages in the text in much the same way as the revelation of the mystery allows you to find out which clues pointed to the truth all along (and which were only cleverly disguised cochineal sea creatures). Dickens' death and the very unfinishedness of the novel itself becomes the end-point from which meaning is constructed in the text. 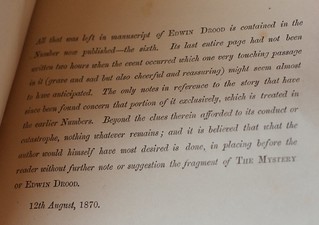 The postscript in full.

This approach is there already in the postscript which Dickens' publishers, Chapman and Hall, printed with the final instalment:

Its last entire passage had not been written two hours when the event occurred which one very touching passage in it (grave and sad, but also cheerful and assuring) might seem almost to have anticipated.3

And in a similar vein, Arthur Waugh, in his A Hundred Years of Publishing. Being the Story of Chapman and Hall, Ltd (1930), writes that

[t]he last sheet he ever wrote contained the eloquent passage telling of the intimations of immortality as revealed upon the changing face of Nature, as it carries him back once more to the Rochester of his boyish memories (Waugh 135).

Rather than pointing to the end of the book, like a particularly ominous version of Chekov's gun the passage from the final chapter is taken to point to the imminent end of its author.4

What may be the same phenomenon carries over into the treatment of Dickens’ contract with Chapman and Hall, with its so-called “death clause”. It has been taken both as an indication that Dickens expected to die and as a more nebulously significant moment of some kind. John Forster, probably the origin of this idea, writes that

In drawing the agreement for the publication, Mr. Ouvry had, by Dickens's wish, inserted a clause thought to be altogether needless, but found to be sadly pertinent. It was the first time such a clause had been inserted in one of his agreements. (Forster 461)

While Forster was wrong (both Robert Patten and John Sutherland refer to a similar clause in the contract for Our Mutual Friend (Patten 303; Sutherland 80)), the suggestion that there is something particularly significant about this death clause is a tenacious one, precisely because Dickens died and this death confers significance on the presence of the clause in this contract in a way in which a different outcome at Staplehurst might have done for that of Our Mutual Friend.5

It is worth noting that the finest fictional treatment of both Edwin Drood and Droodiana, the Italian La verita sul caso D (1989) by Carlo Fruttero and Franco Lucentini (wonderfully translated into English as The D Case or The Truth About the Mystery of Edwin Drood), which sets out to provide a solution to the unfinished work, ultimately ends up providing an explanation for Dickens' death.

The phenomenon takes a wonderfully bizarre turn when people stop obliquely suggesting and start stating the perceived connection outright, inverting cause/effect along the way. Don Richard Cox' annotated bibliography of Edwin Drood (which is absolutely essential for anyone even remotely connected to the study of Droodiana) offers an illustrative description of Lauriat Lane, Jr's “Dickens and Melville: Our Mutual Friends”:

Although the value of Lane's comparisons are not clearly demonstrated, he does propose the interesting thesis that Dickens died because he had already "finished" Drood. Lane's theory is that Dickens so carefully foreshadowed the ending of the novel that the second half of the book did not need to be written. The passage about "the Resurrection and the Light" brought the book to its termination; Datchery's decisive chalk mark was only the final punctuation needed. (Cox 498)

However, my favourite example of this way of seeing the novel is Benny R. Reece's utterly mad book, The Mystery of Edwin Drood Solved (1989). It argues that Dickens wrote the book as a sort of inverted roman a clef, so that anyone familiar with Greek mythology could arrive at the ending he would never live to write.

The death of Dickens as the intended end to the narrative.

The interesting implications of Reece's theory.

My annotations.
Edwin Drood, he claims, is a puzzle designed by an author who had no intention of completing it (and which can therefore be seen as already finished), made to be deciphered by a reader who could identify the clues provided. Based on the assumption that Dickens had patterned his plot on Greek mythology, Reece makes Dickens’ text adopt the complicated family and intrigue patterns of the Olympic pantheon, making it necessary to conclude that Helena (as Artemis) killed Drood (as Orion) because he tried to rape her. Still according to this logic, Honeythunder (Zeus), Tartar (Poseidon) and Durdles (Pluto) are brothers; and Rosa (Eos) is romantically involved with Datchery, Drood, Grewgious and Joe (the omnibus driver), in what Reece accurately describes as a “frankly lewd” romantic subplot (Reece 1989:46). I, for one, never suspected Dickens had it in him.

It is hard (possibly impossible) to see Edwin Drood without seeing the death of its author. Not in a Barthesian way (because this death of the author makes the author all the more significant), but as an end that determines what we are left with. The Mystery of Edwin Drood is at its heart the unfinished book, and the treatment of the work is determined by it, not just in that we lack the second half, but also in how we read the half that we do have. The idea that Dickens never intended to finish the book is just one extreme of a fairly common way of approaching it, namely by using Dickens' death as a truth from which to make sense of the text itself (and the historical events that surround it).


Notes:
1Though fan phenomena, like Sherlockiana, dedicated to create coherence out of what is not an altogether coherent text (no disrespect whatsoever to Doyle), show the power of coherence-making we are capable of when we really put our mind to it.↩

2This does not mean that you are then limited to only one correct understanding of this ending. Pierre Bayard's Sherlock Holmes Was Wrong demonstrates quite wonderfully how even the hermeneutic code can be read against the grain and the mystery of The Hound of the Baskervilles can be shown to have a completely different solution than the apparent one.↩

3The passage in question is in all probability the following, from the end of the final chapter:

A brilliant morning shines on the old city. Its antiquities and ruins are surpassingly beautiful, with the lusty ivy gleaming in the sun, and the rich trees waving in the balmy air. Changes of glorious light from moving boughs, songs of birds, scents from gardens, woods, and fields – or rather, from the one great garden of the whole 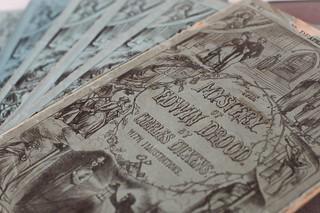 cultivated island in its yielding time – penetrate into the Cathedral, subdue its earthy odour, and preach the Resurrection and the Life. The cold stone tombs of centuries ago grow warm, and flecks of brightness dark into the sternest marble corners of the building, fluttering there like wings.↩

4John Thacker's Edwin Drood: Antichrist in the Cathedral centres his entire reading of Edwin Drood on precisely the theme of death and resurrection which is highlighted in this passage. ↩

5A similar dynamic may be at work in the emphasis on the fact that Dickens died exactly five years after the Staplehurst crash. ↩

Tor,  16.08.15 20:43
I remember that I knew the book wasn't finished when I read it, but I can't remember exactly what I thought about it. Although I seem to recall I thought there should be something more, a sort of very short half-page wrap-up or something.

In any case, this migth be the basis for an interesting interdisciplinary project in experimental psychology/literature: Get thousands of people, tell half of them that the book is half finished, and the others that it's just a regular book, and then have them make notes and answer questionaires after every chapter they read.

Camilla,  16.08.15 20:44
I suspect I would have to get them to sign stuff about not suing me for psychological damage.
Category
Literature
Tags
Charles Dickens
The Mystery of Edwin Drood
Views
4121